The conclusions that Edmunds draws from the analysis is that if GM bought Chrysler, they would want to kill off just about everything except for Jeep and the minivans, where they don't have as much presence. In segments where they do compete, such as mid-sized and compact cars, GM is a frequently cross-shopped brand. This means that if GM killed the Sebring, for example, it would expect to gain some of the volume for itself.

Nissan is one of the least cross-shopped brands with Chrysler. This implies that a Nissan/Chrysler merger would make more sense for Nissan, because they would pick up more products they don't compete directly against. With the caveat that many of these products aren't doing well. But it might be an opening for Nissan to redevelop Chrysler's cars based on Nissan designs, manufacture them cheaply in Chrysler's plants, and play harder against GM and Ford in the competition for the "domestic" car buyer.
Posted by Unknown at 10:08 PM No comments:

According to this piece in TheAutoChannel by one Edwin Black, Honda is pulling an Evil GM (see: EV1) and intentionally limiting the number of Civic GX (compressed natural gas) vehicles it produces and sells.

For all the sinister insinuations, Black doesn't really have an explanation for why it would be that Honda might be producing Civic GXs in limited quantities. That's because Honda clammed up and won't talk to the press about it, which is not surprising. All he can come up with is that Honda is pushing its much thirster Pilot SUV. As if a mid-sized SUV would somehow be hurt by sales of a compact sedan?

There are a number of plausible explanations for why Honda, which is certainly interested in polishing its already good environmental credentials, would be cautious with the Civic GX. Here are a few that are obvious to me:

Quality. Honda is obsessive about quality, and they may want to roll their CNG Civic out slowly until they fully understand how it can fail in the harsh environment of real American drivers.

Cost. Honda may not be making money on these, in fact they could easily be losing money on them, perhaps due to supplier issues. Honda may be treating the program as more of a marketing and product research exercise (like the original Insight?) until they understand the market for CNG better.

Dealerships. Since the CNG Civic has a specialized fuel system, different engine software, and perhaps other changes, special tools and training are required to service it. Since Honda doesn't (can't by law) own dealerships, dealers may have to put up significant capital to get CNG certified. Or perhaps Honda foots the bill, in which case Honda pays significant money for each dealer.

Honda isn't going to spread CNG dealers around the country, if there aren't enough fuelling stations, or customers for that matter, for it to make sense. They will pick a few entry markets, like California and New York, and go there.

And since Honda is obligated to service their CNG Civic, they obviously aren't going to want to sell them in places where they don't have a dealer certified for it yet.

The market is shifting rapidly this way and that. At first, pundits thought diesel was the new way--then the price of diesel shot up so that there was not much of an advantage over gasoline. The ethanol pendulum is swinging one way now, but could swing back the other way again if a backlash builds up. Oil is starting to look cheap again.

Honda isn't being sinister, they're eing cautious in an unpredictible and dangerous economy.
Posted by Unknown at 9:47 PM 1 comment:

I'm posting this to help others find the answer to this bug.

Vista is running fine, but Adobe Photoshop Elements 5.0 had me pulling my hair out... after patching it up to v5.0.2 like Adobe says, and importing my catalog from my old computer, like Adobe says... the Organizer application wouldn't run. It showed me a splash screen, then disappeared.

Task Manager told me that it was running, but it wouldn't open a UI.

After much fooling around, un-installing and re-installing PSE, I finally found this article on Adobe's support site.

Apparently, the file monitor service breaks Organizer on some Vista sysems (like mine). To fix it, I simply turned off the service. From Adobe:

Note: You may not be able to use the Watch Folders function if you turn off the Active File Monitor service.

This fixed my problem, but now the Organizer won't be able to find new photo files that are dropped in disk folders.
Posted by Unknown at 12:36 AM No comments:

Email ThisBlogThis!Share to TwitterShare to FacebookShare to Pinterest
Labels: Gear

WIndows Vista: Not So Bad

I needed to buy a new PC, and I found a pretty good deal on a Dell Optiplex 330 (dual core, 2GB ram, 160GB HDD). I decided to take a risk and get Windows Vista (Business), even though I read all kinds of horror stories about how unstable, slow, annoying, buggy it is.

I also heard that much of my old software would not work in Vista. Not true, so far all this stuff seems to be working fine:

Software that won't work:
Considering how blazing fast the new machine is compared to my old Dell 3000 (P4), and that it cost all of about $500, I'm very pleased.
Posted by Unknown at 2:29 AM 1 comment:

Email ThisBlogThis!Share to TwitterShare to FacebookShare to Pinterest
Labels: Gear

Video: Motorcycle Wreck On Board

I don't think the guy was seriously hurt, maybe he learned a lesson?

A few more thoughts on the possible merger of GM and Chrysler.
It sounds preposterous because it would add even more brands to GM's already confusing portfolio.  Consider:
Chop too many brands and you starve your dealer network.  Keep too many and you get a big badge engineered mess, or lose efficiency.  The new religion in the industry is to be lean, simple, agile--picking up more brands is like going back to the 1990's.
On the radio this morning, I heard an interview with the guy who broke the story in the New York Times, Bill Vlasic.  One theory, mentioned in the paper,  is that GM may be after a cash-out deal, where they get a pile of cash along with Chrysler.  This may make short term sense, but it would leave GM with the albatross of Chrysler's crummy products, legacy costs, UAW contracts.
Another possibility is that, somewhat like a star expanding into a huge red giant as it begins the final stages of its life, GM may be trying to grow into a company so huge it can not be allowed to fail.  The government would have to come with support, or risk an economic supernova (or black hole?).
Also, it would make strategic sense in the long run for GM to off a major competitor.  By removing capacity from the system, it may ensure more business for GM in the future.
Posted by Unknown at 1:29 PM 4 comments:

A 70 year old guy in Illinois is upset that he got a speeding ticket. He intends to speed away, but is in reverse, and winds up backing up onto the hood of the cop's car.


How To Get Jail Time For A Speeding Ticket - Watch more free videos
Posted by Unknown at 10:09 PM 3 comments:

The WSJ reports from unnamed sources "familiar with the matter" that GM was in talks with Cerberus to trade the rest of GM's stake in GMAC with Cerberus for the car (not finance) part of Chrysler.

This seems like a bizarre idea to me. GM would be picking up a big portfolio of non-competitive products (Sebring, Caliber, etc.) and redundant products (Ram). GM would also get lots of deflated real estate, such as the sprawling Auburn Hills headquarters, not to mention the plants, such as Belividere, which make the weak products. GM would also wind up with more UAW workers, and more UAW pension obligations. And GM would wind up with Chrysler's dealer network, compounding the problem of having too many dealers making too little money.

But GM's management would have some business reason to want Chrysler, what would those reasons be? Here's my theory.

1) Minivans. GM got killed in the minivan segment, and this would put them back in the game.
2) Truck dominance. GM could kill off the separate Ram platform and sell a Ram based on the Silverado, taking the truck sales crown from Ford once and for all.
3) Jeep. Even though Jeep has been watered down somewhat by Chrysler's attempt to grow Jeep into small crossovers (Compass), it is still a strong brand.

But all of these strengths are in the light truck and SUV sector, precisely where GM is already too heavy. With the coming tightening of CAFE rules, what business case would there be for GM to acquire more trucks and SUVs?

The idea just doesn't make much sense to me, as the armchair CEO.
Posted by Unknown at 8:18 PM 1 comment:

Heh, I noticed a little bit of web advertising sneakiness on the part of Chrysler. On my own blog, no less. Take a look at the Google Adwords panel in this screen capture. 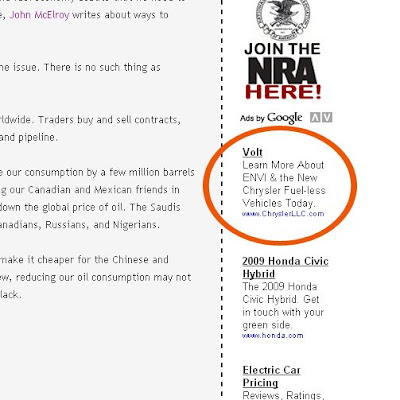 Posted by Unknown at 7:10 PM No comments:

There's a new scam going around, which is a slightly more sophisticated variation of a fake escrow trick.

Scammers post for sale ads in classified services such as Craigslist or AutoTrader, with a too-good-to-be-true price. Here is one example I found: 2005 Honda Accord. 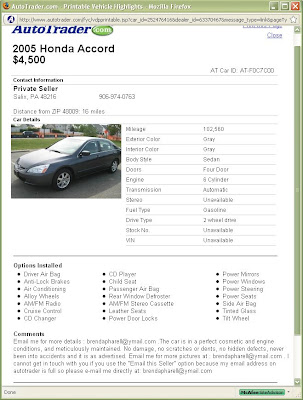 The car is a real car--in the sense that they borrowed some photos and a VIN from somewhere, so if you run it through CarFax it will check out as a real vehicle.

If you respond, they send you a fake invoice from eBay Motors, along with a fake "Vehicle Purchase Protection" service email. 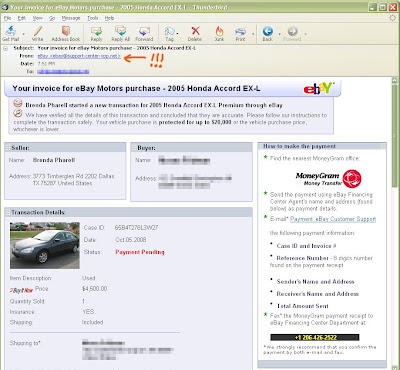 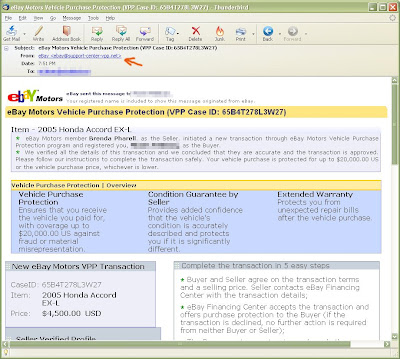 It isn't a perfect fake, but it may be convincing to someone who doesn't know much about eBay. The real eBay Motors does not operate an escrow service, and they explicitly don't allow MoneyGram payments! Also note the fake eBay email address, "ebay@support-center-vpp.net".

The scammers want you to send a non-traceable payment (MoneyGram, Western Union) to a "payment agent", who is probably some idiot who signed up for a "work at home" job "processing internet payments". That guy cashes the payment, and forwards it on to the scammers.

I tried to make contact with the scammer, but he was being very careful--he wouldn't give me a phone number. He stopped respoding to my emails after I pointed out that eBay doesn't allow Moneygram payments, and asked if he could take a PayPal payment instead.

Update: I am starting to see reports of this scam spreading out into Canada and the UK, using other services such as Moneybookers. The rules are the same. If the price is too good to be true (way below market) or the guy wants you to buy a car without being able to look at it, it's not real.
Posted by Unknown at 9:17 PM 407 comments: