In an article in their vehicles section, Forbes online published a list of the least safe 20 vehicles, ranked according to the Statisical Combination Of Risk Elements (SCORE) metric. The SCORE metric is published by an organization called Informed For Life (which I have not heard of before), and is an attempt to rate how safe a vehicle is by combining various statistics into one number.

I have some reservations about the usefulness of the SCORE metric, however, because it doesn't really correlate that well with actual driver death rates, as published by the IIHS.

Here is a plot published by IFL which claims to show the correlation between the SCORE an driver death rates per million registered years:

What you might notice right away is the large spread of SCORE values for any given driver death rate bin. For example, for the 50-60 bin, which is well below average, the SCORE varies from 80 to 180--from 20% better than average to 80% worse than average. I also notice the R^2 value of 0.48, which is not a stellar mean squared error. SCORE clearly has some correlation with driver death rates, but it is rough.

Here are some specific examples of vehicles that have high (bad) SCORE scores but have pretty good real-world safety records:
All of these have higher-than average risk according to the SCORE metric, but in real life have lower than average fatality rates! It seems that SCORE puts too much emphasis on crash survivability, and not enough other factors like the ability of a vehicle to avoid an accident. It also seems to over-state the danger of rollovers. Something that is not widely publicized is that 70% of rollover fatalities occur when occupants are not wearing seatbelts (source: NHTSA). However, most people (~80%) are wearing their seatbelts nowadays, which partly accounts for why SUVs have a good safety record overall. The SCORE is really an estimate of how safe a car is in an assumed buy unspecified crash.

Aside; The IIHS driver death rate statistic also has some problems. IIHS does not account for driver behavior, which causes some vehicles such as sports cars to have much higher driver death rates than their crash test results would suggest. An interesting example of this is the DDR number for the Ford Mustang convertible (DDR 97) vs Ford Mustang hard-top (DDR 150). The two cars have nearly designs, from a crash point of view, but the Mustang hard-top has a much higher single vehicle death rate. It would appear that hard-top owners drive stupid more frequently than convertible owners.

The SCORE metric is an inconsistent predictor of vehicle safety in the real world. That doesn't mean it is worthless, but like anything, even the IIHS driver death rate statistic, it should be considered as part of a larger picture.
Posted by Unknown at 9:00 AM 1 comment:

Some advice to the guys over at Autoblog: slow it down, 'kay? You aren't Engadget. I know you feel like you have to stay on top of the automotive news world, but most of us can't check your site every two hours. Miss a day and you miss like two front pages worth of stuff. Raise your standards for what is worth posting and what isn't (hint: do it yourself articles by Eric are awesome, warmed over press releases are not). Otherwise, you risk burning out your readers.
Posted by Unknown at 9:43 PM 3 comments:

I got an email from an outfit called LemonFree, which is an upstart auto classified service. Lemonfree's method is to offer free auto ads, and to make money from advertising. They have a nice, uncluttered web site. A very nice feature is that they offer free hosting of up to 10 photos with your ad. They don't have many ads yet, though, so if you try to actually search for a car, you will probably get a list of eBay motors auctions. Hopefully they will do better than that in the future. I'm also concerned about their name--it implies that they check the quality of the vehicles that are listed, but in fact, they do not. So it is possible to get a lemon. I wish them luck--the 800lb gorilla in this business is Craig's list.
Posted by Unknown at 9:31 PM 2 comments:

Video I saw on YouTube of a recent Forumula 1 crash at the Nurburgring. Left front tire blew out, and car slid off track and into the safety barrier. Driver survived.

I saw a prototype of Michelin's Tweel (tire wheel) at an SAE congress not long ago. This short, neat video about it is making the rounds on the web.


Reinventing The Wheel - Watch more free videos
Posted by Unknown at 12:24 AM 3 comments:

Have you taken the time recently to read the words of The Star Spangled Banner?

O say, can you see, by the dawn’s early light,
What so proudly we hailed at the twilight's last gleaming,
Whose broad stripes and bright stars, through the perilous fight
O’er the ramparts we watched, were so gallantly streaming?
And the rockets’ red glare, the bombs bursting in air
Gave proof through the night that our flag was still there;

O say, does that star-spangled banner yet wave
O’er the land of the free and the home of the brave?

(the rest, not commonly heard)

On the shore, dimly seen thro’ the mist of the deep,
Where the foe’s haughty host in dread silence reposes,
What is that which the breeze, o’er the towering steep,
As it fitfully blows, half conceals, half discloses?
Now it catches the gleam of the morning’s first beam,
In full glory reflected, now shines on the stream

’Tis the star-spangled banner. Oh! long may it wave
O’er the land of the free and the home of the brave!

And where is that band who so vauntingly swore
That the havoc of war and the battle’s confusion
A home and a country should leave us no more?
Their blood has washed out their foul footsteps' pollution.
No refuge could save the hireling and slave
From the terror of flight, or the gloom of the grave,

And the star-spangled banner in triumph doth wave
O’er the land of the free and the home of the brave.

Oh! thus be it ever, when freemen shall stand
Between their loved homes and the war’s desolation,
Blest with vict’ry and peace, may the Heav’n-rescued land
Praise the Power that hath made and preserved us a nation!
Then conquer we must, when our cause it is just,
And this be our motto: "In God is our Trust"

And the star-spangled banner in triumph shall wave
O’er the land of the free and the home of the brave.

A good, solid performance of the national anthem usually leaves me choked up, it is really a powerful poem.

I am fortunate beyond words to live in the USA. There are many great nations, and I could probably be happy in one of them, but on the other hand, I could have been fated to live in Cuba or Zimbabwe. My country is not perfect, but compared to the alternatives, She practically is.

Most people set their side view mirrors to partially show the rear quarter of their car. A few years back, I heard Tom and Ray Magliozzi of Car Talk counsel someone to try a different method. I have been using this technique ever since, and I am very happy with it. The wide setting method virtually eliminates rear quarter blind spots by moving the side mirrors out somewhat to reduce overlap with the rear view mirror. Here is a diagram (click for full size): 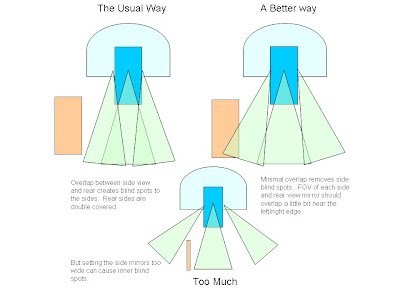 It is important to note that you don't move the mirrors out so far that you have no overlap at all. By having a little overlap, you continuity between your rear view and side views.

The downside to this method is that you can't automatically see what is immediately beside and to the rear of your car, which is even more of a problem for vehicles with poor rearward visibility such as trucks and SUVs. To see what is beside you, you need to lean forward and left or right a little, depending on which side you want to see. Overall, though, I find I am much more frequently interested in lane changing safely than in backing into a parking spot.

Cartalk has a detailed explanation here.
Posted by Unknown at 1:40 PM 6 comments: