I am tightening the policy for comments, from now on, only users with an OpenID or other form that Blogger accepts can comment.
Posted by Unknown at 12:22 PM 2 comments:

Edmunds has a very nice photo review of the Fisker Karma suspension.
My takeaway: heavy car, expensive chassis, very complex.   But also very impressive, considering the complexity of the machine.   Tesla, for its Roadster, let Lotus take care of the chassis and suspension design and had to focus mostly on the powertrain.
I will be amazed if Fisker makes enough money to stay in business with this model.
Posted by Unknown at 10:41 AM 2 comments:

This is what the world has come to.   GM is putting a four-banger in a Cadillac.
But this isn't the I4 of old, this is a modern, direct injected turbo with variable cam timing.  The GM 2.0L Ecotech makes 270HP and 260lb-ft of torque.  It is a similar engine to the Ford 2.0L Ecoboost which is now the fuel economy option for the Explorer.
By comparison, the FWD versions of the famed Northstar engine family (LD8) made 275HP and 300ft-lbs, out of a whopping 4.6L of displacement. I was sent this prank gift box, which is hilarious. 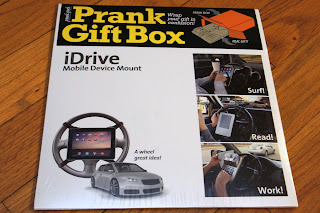 It is designed to look like a believable (but crazy) product, the iDrive, which is a suction cup and claw mount to mount iPads and other devices on your steering wheel or other unsafe places.  Photos on the back show it being used in cars, on a factory runabout and also on a jet ski. I wonder, though, how the box maker gets away with using "iDrive", which is a real trademark for a number of different types of products, including data storage and surgical staplers. 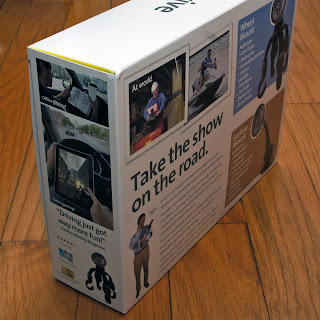 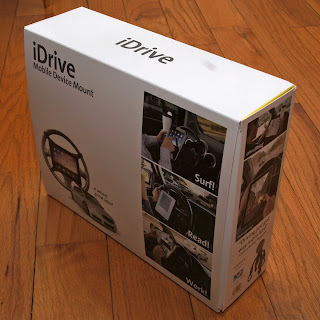 The actual product is the prank box itself, one of many that are sold by Prank Pack.

I am going to use it on a friend, who is both a car nut and a Apple cultist.

According to the Detroit News, this is the list of most popular vehicles for senior citizens.  I have added additional information: which models are discontinued.

The interesting question to me is, what will the old folks buy now that the softly spring boats have mostly gone extinct?
Posted by Unknown at 9:33 AM 6 comments:

A momentous day in U.S. history.
http://en.wikipedia.org/wiki/Attack_on_Pearl_Harbor
Posted by Unknown at 11:47 AM No comments:

Cool.  From PhysOrg.com.
Michelin has also been working on the Tweel airless tire for some time now, but it isn't ready for civilian commercial sale, yet. The blogosphere and news media have become somewhat excited about the Chevy Volt battery fires, and GM has been very defensive, going so far as to offer to buy back Volts from any skittish customers.

I don't see what the big deal is.
There zero cases of Volts having battery thermal issues after getting in an accident in the real world.  There have been a couple of cases of garage fires, however the causes are not yet known and it is quite possible that the fault lies in poorly done 240V wiring, and not with the Volt.
There are four cases of Volt batteries having thermal reactions after being first disconnected from their liquid coolant supply, then damaged, and then overturned by NHTSA.  This is like sideswiping a pole at high speed, at exactly the point where the battery extends out towards the sides of the car, then rolling over, and then letting the battery sit damaged for several days without being discharged.
Here's an experiment: smash a gasoline car in such a way as to rupture the gas tank. Then turn the car over and let the fuel run where it will.
Also, consider the number of gasoline vehicle fires that occur every year.  In 1999, there were 288,000 highway vehicle fires, due to all causes (accident and otherwise), according to the NFPA.  According to a 1990 study by NHTSA, motor vehicle fires due to accidents occurred at a rate of 2.86/1000 vehicles.
So if Volts had the same rate of accident caused fires as gasoline vehicles, we would expect to see about 14 Volt fires this year.  But we haven't, even though Volts do carry gasoline on-board.
Posted by Unknown at 10:50 AM 1 comment:

I have been watching with morbid fascination the death spiral of Aptera, the designer of the electric trike that looks like a big spermatozoan, which didn't do well in the Progressive Automotive X-prize competition.  To stave off death, Aptera was working on a traditional 4-wheel vehicle concept which they hoped would attract new investors and help them qualify for a DOE AVTM loan.  Aptera stated that they needed $150 million in new money to start work on the new vehicle, but investors did not come to the table.

And that was a wise decision.  Despite an interesting and aerodynamic design, the Aptera 3-wheel concept was not practical for any large market, and would have been very expensive to produce in small volumes.   Like the other X-prize finalists running 3-wheel designs, Aptera was more of a design study than a marketable product.
To date, there are still no production-ready enclosed 3-wheelers for sale in the U.S. and I doubt there will ever be.  The inherent safety and comfort trade-offs are too great for more than a few novelty-loving customers.
The question in my mind is, who is next to fold?  Up-start auto companies funded by venture capital don't have a shining history (DeLorean, Bricklin...).  Will Tesla and Fisker make it, financially, or will they burn through their cash before catching on?
Posted by Unknown at 10:08 AM No comments: