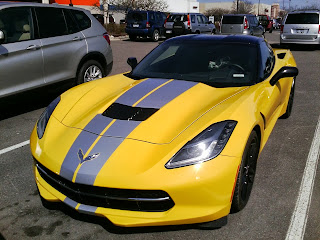 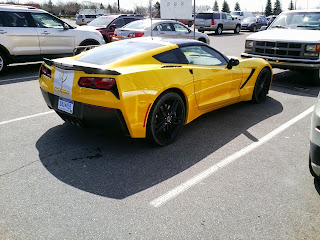 The interior is a big improvement over the previous car.  The exterior design leaves me a little cold--I think it is a bit busy for my taste.

The NHTSA has decided to delay the regulation requiring backup cameras until 2015,  announced in a latter to Senator Jay Rockefeller from Ray Lahood.  One reason stated was that NHTSA needed more time to study the cost/benefit equation for the backup cameras.

My issue with the proposal is that it will force carmakers to add expensive LCD displays to vehicles which may not already include them, driving up the price of the lower feature vehicles.

If rear ultrasonic sensors are cheaper, I would suggest that method as an acceptable alternative.  The backup warning systems have the added benefit of reducing accidents that happen when people aren't careful when reversing the vehicle.  In theory, a backup warning mandate would reduce insurance costs.

Source: Bloomberg
Posted by Unknown at 11:12 AM No comments:

iOS For Your Car?

Apple's recent announcement that they would be working with automakers, including heavyweights GM, Honda, and Hyundia + Kia, to integrate an iOS interface into their dashboard infotainment systems.

Notable in their absence from the announcement were the major automakers Ford, VW, Toyota, Fiat + Chrysler.

I think the holdouts have the right idea.  Getting married to Apple's iOS interface means giving up the branding of the infotainment system, and some control over how it behaves.  A better approach is to use a system designed to integrate tightly with the vehicle, which has the right interfaces built into it to talk to any smart (or dumb) phone using open standards such as BlueTooth.

According to recent sales numbers, Android and iOS about the split the market in the U.S., and internationally, Android is the runaway winner.  Any global automaker that embraces an iOS optimized infotainment system may be making a business error. 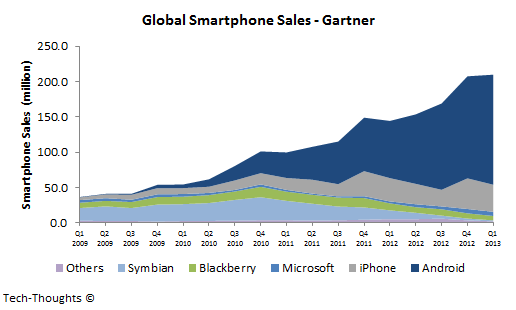 (Graph courtesy of Tech-Thoughts)
Posted by Unknown at 9:44 AM 1 comment:

Should Chrysler Recall The Jeeps?

NHTSA wants Chrysler to recall 2.7 million vehicles to install some kind of crash mitigation hardware on the vehicle to reduce the likelihood of the fuel tank rupturing in a rear end crash.

On one hand, according to the data, the Jeeps in question are about 2x more likely to leak fuel and catch fire in a rear end crash than other vehicles.  NHTSA found that Jeeps were having rear crash fire deaths at a rate of 1 per million miles travelled, while the average for all vehicles is 0.5 fire deaths / million miles.

On the other hand, recalling that many vehicles and repairing them will be a very large task, and very expensive for Chrysler.

Chrysler rightly argues that its vehicles met all safety standards that were in force at the time they were certified.  NHTSA is essentially asking for a retroactive safety recall.

I think a nice middle ground solution might be for Chrysler to develop a retrofit kit, and offer to repair customer vehicles on a request basis.  Those who are concerned will get the fix, and those who aren't will not bother.  Likely it will be much less than 2.7 million customers.

The guy who bought Aptera's bones was trying to set up Chinese manufacturing for the chassis.  That isn't going so well, so now he says he is going to build them here in the U.S.

The Texas legislature failed to advance bills sponsored by Tesla that would allow direct-to-consumer sales.  This means that to sell in Texas, Tesla has to work through dealer franchises.   Tesla won't be able to try again until the next session, not due to start until 2015.

You can read the Automotive News article here.