There seems to be this persistent theme in the energy policy and fuel economy debate that we need to be independent of "foreign oil". In his latest column, for example, John McElroy writes about ways to reduce our use of "Pesian Gulf" oil.

This is really an emotional play, to get people worked up about the issue. There is no such thing as "Persian Gulf" oil, in terms of public policy.

Oil is a commodity, which is traded on commodities markets worldwide. Traders buy and sell contracts, and customers who actually want oil arrange delivery via tanker and pipeline.

The "middle eastern oil" label implies that if we could just reduce our consumption by a few million barrels a day, we could bankrupt the Saudis (a worthy goal) while keeping our Canadian and Mexican friends in business. But really, what would happen, is that we would drive down the global price of oil. The Saudis wouldn't starve, but they would make less profit, as would the Canadians, Russians, and Nigerians.

An unintended side effect of reducing our use of oil would be to make it cheaper for the Chinese and Indians to burn more of it--so from a global warming point of view, reducing our oil consumption may not have that big of an impact if the developing world picks up the slack.
Posted by Unknown at 6:03 PM 3 comments:

As if you didn't need another exhibit of how bad it is to not wear your seatbelt. It is very hard to be thrown out of a car if you are buckled in.

One day, he might Darwin his way out of the gene pool.


Not Father of The Year - Watch more free videos
Posted by Unknown at 10:58 PM 3 comments:

According to various sources (see Autoblog), GM is killing its plan to bring a c-class (compact) 7-seat people mover to the U.S., the Chevrolet Orlando.
This puzzles me, for several reasons.  The concept is a handsome vehicle, and looks quite practical.  It reminds me of a down-sized Traverse.   I think it is an exciting vehicle that would compete well.
Other carmakers are already selling small people-movers with some success, such as the Kia Rondo, Mazda 5.  More small MPVs are going to be sold in the U.S. in the near future, such as the rumored Ford C-Max (and possibly S-Max) MPVs based on the European Focus.  Honda may bring the Stream here as well.
Maybe, for some reason, the economics didn't work out for GM.  But from my seat, this looks like a mistake.
Posted by Unknown at 10:48 PM No comments:

Last weekend, the Wall Street Journal ran a supplement  with some generally well written articles about the future of energy, including such things as LED light bulbs (not quite ready yet) and underground coal gassification.  It is very interesting reading, and if you haven't seen it, take half an hour and read it through.
There was a good article by Joseph B. 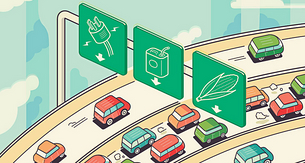 White about why the gasoline engine will be with us for the foreseeable future (lots of power for the pound, low cost).  But the Journal also published a table comparing some of the different upcoming greener powertrain options, which had some issues.
I can't reproduce the whole table here easily (but you can read it here).  I'll just hit on the parts I think they got wrong.
First, describing Flex Fuel vehicles, WSJ wrote that they have "no price premium" compared to gasoline vehicles.  This is not really true, as ethanol capable fuel systems must be made of different materials to resist the corrosive effects of alcohol.  Also, the engine control system (mostly the software on the PCM) must be more complex to handle ethanol, because it can be present in any concentration from E10 to E85 due to fuel mixing.  This requires substantially more development work by the powertrain engineers, and substantially more testing.  The actual cost per vehicle of a flex-fuel system is somewhere closer to $100-200/car, in large volumes.
Regarding plug-in hybrids, WSJ noted that the "advanced batteries are not yet available".  This is true, in the high volume commercial sense.  However, it was not mentioned that the high capacity batteries required to make plug-in hybrid cars work will be rather expensive, on the order of $3000/car more expensive than the current hybrid batteries.
WSJ got sloppy with pure-electric cars.  They wrote, "Technology still unproven. Batteries not available."  Except that pure electric cars have been in mass production since about 1900.  And batteries are available--until recently, most electric vehicles used lead-acid batteries.  The article also misidentified the Chevrolet Volt as a pure electric car, which it is not-it is a "series hybrid", which is a car that has electric drive but can use gasoline to power the electric motor through a generator.   What the article was probably trying to get at was that currently, pure electric cars can not compete in range with gasoline cars, but they didn't' say so explicitly.
Finally, regarding clean diesel, WSJ neglected to mention that most implementations require the driver to top off a urea tank to aid in NOX reduction--a definite annoyance, and a minus in my opinion.
Posted by Unknown at 9:37 PM 4 comments:

With a glued on vinyl roof.

Any dealer caught doing that to a modern car should have their franchise yanked.
Posted by Unknown at 10:12 PM 3 comments:

Today is GM's 100th birthday. For all of its problems, you can not ignore the impact that GM has had on the automotive industry, and the impact that it continues to have today. Even in its current, pruned form, GM is still one of the largest companies in the world. Some stats:
Some GM Innovations:
And GM has made some very popular and important cars over the years. Corvette. Suburban. Impala. Camaro. Bel Aire.

Here's a toast to GM. Keep fighting, guys, Michigan and the whole industry needs you.
Posted by Unknown at 9:12 PM 2 comments:

I was browsing through a recent copy the WSJ when I came accross an article about soybean prices. On Friday, soybeans jumped by 23% on worries of short supplies.

The writer attributed the increase to to main factors: lower supply due to displacement by corn, and a delayed harvest due to a wet spring and summer.

Agriculture processors such as Archer-Daniels-Midland Co., and Cargill Inc. crush soybeans into soybean oil and soybean meal. Soy oil is used in cooking and has industrial applications such as biodiesel. Soymeal is fed to livestock.

Soybean stocks are at near-record lows this year. That is partly because farmers last season planted more corn instead of soybeans to cash in on high corn prices driven by a booming export market and a growing appetite for corn-based ethanol.

This illustrates the danger of quickly shifting to food based bio-fuels. The high demand for corn caused farmers to plant more corn and less soybeans (and other crops, like barley and wheat). This reduces the supply of those crops, and causes our animal feed and food prices to increase. Beer is getting more expensive!

Instead of propping up corn based ethanol, making big agriculture even richer, and driving our food prices up, Congress should kill the ethanol tariff and allow importation of ethanol and sugar beet feedstock from Brazil. This will allow us to bridge our ethanol needs until the point when non-food sources of ethanol are viable.

Of course the ethanol mandates and price supports are not the only reason that food has gone up in price so dramatically, probably the largest factor is the price of oil, followed by a weakened dollar.

If you haven't been watching his blog in RSS, be sure to add Mark Tapscott's Straightline Blog over at Edmunds. He just posted the latest version of the Carnival of Cars.

I started the Carnival of Cars for "independent" bloggers some time ago, and later Mark Tapscott took it over and has kept it going.

What's a blog "Carnival"? it's a compendium of posts from a few different blogs, sort of the "best of" and a quick way to check up on what different bloggers are doing. By "independent" bloggers, I mean the small guys who write their own thoughts, rather than repackaging press releases like the corporate owned blogs like Autoblog.

Not that there is anything wrong with Autoblog, but their ratio of original content to repackaged press releases is sometimes pretty small. I wonder what happened to Eric Bryant ("The Angry Engineer")? he was a good source of down-on-the-ground original writing.

The neat thing about small bloggers is that most of us don't make money from our blogs, and are doing it for fun, or as a way to vent.
Posted by Unknown at 11:34 AM 2 comments:

An amusing contrast. From UrbanGrounds

(Not that there is anything wrong with riding a pedal bike, or anything. I think Palin has better legs).

Email ThisBlogThis!Share to TwitterShare to FacebookShare to Pinterest
Labels: politics