This is making the rounds, and it is really neat. This is a demo of using a genetic algorithm to design as simple 2D car.  I find that it goes a little better if you keep the mutation rate lower, so that you don't waste a lot of chances on DOA designs.

Link
Posted by Unknown at 10:08 AM No comments: 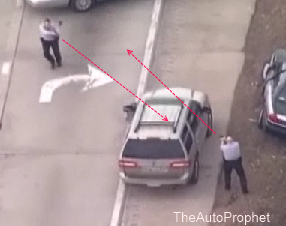 Take a look at this still from a video posted on Jalopnik.  After a sloppy PIT maneuver, which causes the policeman on the right to be jammed into the retaining wall, both policeman jump out and draw their pistols.  But since they are approaching from oppposite sides, they are pointing their weapons roughly at one another.

Shouldn't the guy on the right have stayed in front of the vehicle, so the fields of fire would have crossed like an X?  Am I missing something?
Posted by Unknown at 10:42 AM 1 comment:

Over at Car Gurus, there is a post about a traffic flow design concept which eliminates left turns at intersections. Called a "superstreet", the design prevents cars from crossing a major street, and instead do what is known around here as a "Michigan Left".

From the NCSU study on the subject:

“The study shows a 20 percent overall reduction in travel time compared to similar intersections that use conventional traffic designs,” says Dr. Joe Hummer, professor of civil, construction and environmental engineering at NC State and one of the researchers who conducted the study. “We also found that superstreet intersections experience an average of 46 percent fewer reported automobile collisions – and 63 percent fewer collisions that result in personal injury.”

A Few Thoughts About 2011 COTY/TOTY

For 2011, as I am sure you have heard, the North American Car Of The Year award went to the Volt, and the Truck Of The Year went to the Explorer.
I thought both of these were worthy contenders, but I would only have voted for one of them.
The Volt is a solid piece of technology, but it isn't revolutionary--under the skin, its architecture is not all that unique from a Prius or a Fusion Hybrid. Despite what GM says, the Volt is in fact a plug-in hybrid, and it can even (under some conditions) send gasoline torque to the wheels. Like the other hybrids, it has a gasoline engine connected to a generator and traction motor through a planetary gear set. It has been tuned in software not to behave like a gasoline/electric hybrid. As neat as the Volt is, it is not quite the revolution that an all-electric car would be.
For the COTY I would have voted for the Hyundai Sonata. Here is a company which came from a legacy of pushing boring, cheapy cars using a long warranty and low prices. All of a sudden, they are building world class cars, with high quality and handsome design. And unlike the Leaf and Volt, the Sonata will sell in high volumes. Considering its market impact, the Sonata should have won.
For TOTY, I agree with the panel, and I would also have picked the Explorer. A uni-body, front wheel drive mid-size SUV is the way of the future. Most SUV owners don't need to go offroading, and don't tow anything either. Most of them really just want to sit high and look stylish.
The Chrysler trucks were strong contenders, and I actually thought one of them would win, as a pat on the back to Chrysler for not dying. The Grand Cherokee appears to be a solid product and much improved compared to the junky stuff Chrysler was selling previously.
Posted by Unknown at 8:42 PM 1 comment:

I'm not sure why you would want to have a drift contest between a motorcycle and a car on the same track simultaneously, in fact I'm not totally sure what the point is, other than perhaps to die in style. But the video is wicked.
Posted by Unknown at 8:29 PM No comments:

The Plural Of Prius is Priora

Toyota is asking "What is the plural of Prius?".
Since Prius is a Latin word, if it is pluralized in Latin, they should probably be called "Prius"  or "Priora".  Apparently "Prii" is not correct.
There is a long explanation here (not mine).
Posted by Unknown at 10:02 AM 1 comment:

Ford's big unveiling at the CES in Las Vegas was its new Focus Electric, and associated apps and charging stations.

One of the items that caught my attention was the cutesy butterfly graphics that, like the green leaves on the Ford hybrid instrument clusters, give positive feedback about your driving style. Ford said that the butterflies were inspired by "the butterfly effect".

The Butterfly Effect is an illustration of instability in nonlinear systems, (also known as "Chaos theory"). Which I happened to take a class on in college. Basically, if you have a nonlinear system, and you start out at two very similar but not identical starting points, you may wind up in a very different state. That is, small perturbations may case large changes in the final outcome. The old example was the butterfly that flapped its wings, and caused the weather to shift on another continent.

What this has to do with driving a Focus EV I am not sure. Do they mean to say that driving a Focus EV will save enough gasoline to cause the Saudis to go broke? Seems doubtful. Perhaps a Ford P.R. guy can email me and explain it. In the meantime, I propose that there should be a "Punisher Mode" for these displays.

How this would work is when you drive like a bad-ass, you get little skulls. Hard acceleration, high lateral g's, hard braking, etc.