Changes In The (Autoblogging) Landscape

When I started doing this, there were a few intrepid auto bloggers, pounding away in obscurity.

Then AOL bought Autoblog, and made it into a press release firehose. Jalopnik tries hard to keep up, but does it with more flair, OfficeSpace style. Eric of AngryEngineer was seduced by the dark side ("Jedi mind tricks don't work on me, only money") and joined Autoblog, wrote some kickass how-to articles, then disappeared.

Joe over at MyFordDreams, apparently worn down by his beloved Ford's inability to gain traction, slowed down to a trickle and then stopped. Now Carpundit has thrown in the keyboard, with the mysterious sign off "I am done with this blog. Blogging is over for me; three years was enough. Bye.". Automuse, perhaps the only female autoblogger, is very slow, but might still be going.

On the bright side, we now have Mark Tapscott, who took over the Carnival of Cars duties, and who actually gets on TV every now and then. Keep it up, Mark! And Pete De Lorenzo of AutoExtremist still throws it down weekly, pulling no punches.

Blogging is actually a lot of work, if you want to say something you think is your own, and don't want to sound stupid--although I can't claim to avoid that consistently. It's easy to repackage a news story from the Detroit News or a press release from Isuzu, harder to come up with a coherent commentary on what it means.

Do you have an opinion? Why don't you try your hand? We need more real bloggers, guys who sit in their basements in furry slippers at 2:00am trying to shout some common sense at the people in the private jets.
Posted by Unknown at 9:51 PM 13 comments:

After the Minneapolis bridge collapse, my wife asked me if we could get some seat belt cutters "just in case". She wanted some extra confidence, in case she was ever trapped in her car, or needed to help someone else out.

I did a Google search, and found a very nice tool made by Gerber, which also makes the excellent Multi Plier multi-tool (second only to the high end Leatherman tools). Amazon sells it (here) for a very reasonable $5 plus shipping. 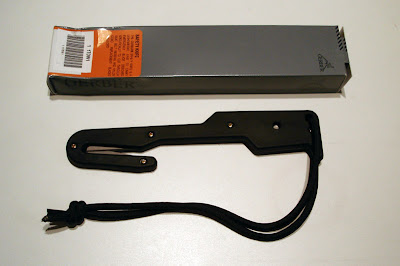 The knife has a simple and easy to use design, with a cutting hook on one end, made from two opposed straight blades, a body made of tough black plastic, and a nylon lanyard at the other end. To use it, you hook the cutting end over a seatbelt and pull, drawing the two blades through the fabric. 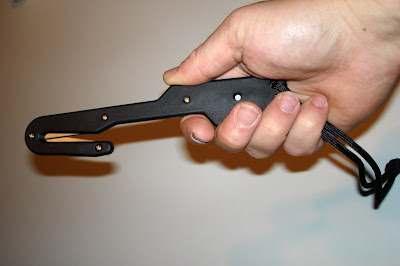 Once you get one of these, another important consideration is where to keep it. If it is in your trunk, or the back of your glovebox, it won't do you much good. A better way to keep it is to use duct tape or velcro tape to affix the cutter to the underside of the driver's seat, or a similar out of the way surface, where you can grab it quickly and easily.

Will you ever need a seat belt cutter? Probably and hopefully not. But for $5, it is a cheap bit of extra insurance.

P.S. I also keep a center punch, to easily break safety glass with. $10 at any hardware store.
Posted by Unknown at 9:11 PM 2 comments:

I went to the Woodward Dream Cruise late, when it was starting to rain, and didn't really see much that was all that new or exciting. There were lots and lots of 60's and 70's muscle cars, which get old after a few minutes. Here are a few photos I grabbed. 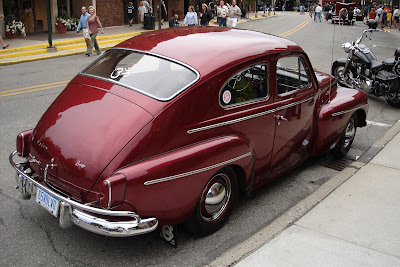 A carefully restored 1965 Volvo. With Arabic script on the rear window. 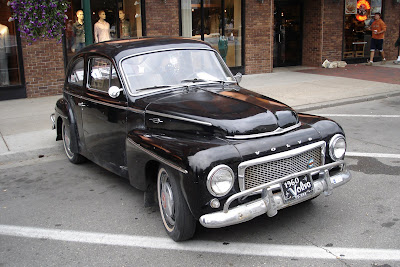 A not yet carefully restored Volvo. 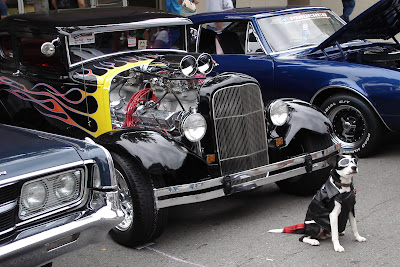 This dog was posing in front of his owner's hot-rod. 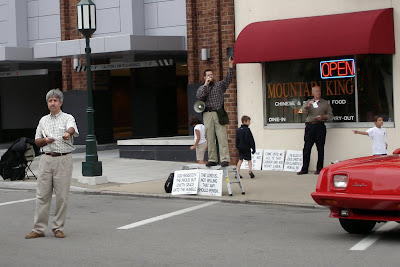 The street preachers took up shop outside the Hall Of
The Mountain King, near some Avantis. 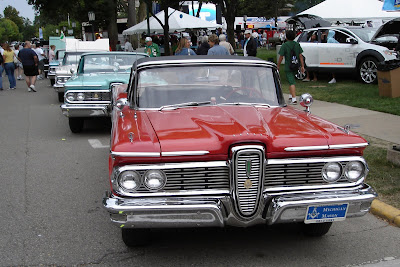 Near the Ford area, some Edsels (still ugly after all these years).
In the upper right is an experimental hydrogen fuel cell powered Edge. 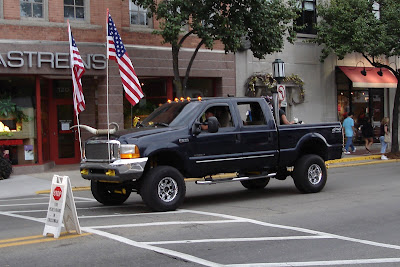 This horned monster truck was cruising through the
Birmingham shopping district. Too much, dude, too much. 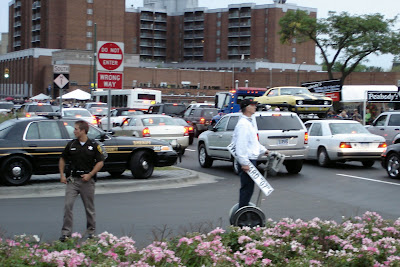 A segway nerd scoots past a non-plussed Oakland County sheriff.
The Dream Cruise experience was under-whelming. Too many muscle cars, not enough really old cars. I did see a restored deuce-and-a-half WWII vintage truck cruising around, which was neat. There was also a cube van plastered with huge photos of dismembered fetuses, to protest abortion, which was not. I am pro-life, but man, don't rub it in my face like that. There were a lot of for sale signs on cars--if you were in the market for an expensive toy, you could have done very well at the Dream Cruise this year.
Posted by Unknown at 9:00 PM 4 comments:

Video Idiots, Vol 7: How Not To Remove A Pole

No, his bumper does not come off. It's about as bad, though.


How Not To Remove A Basketball Hoop - Watch more free videos
Posted by Unknown at 10:13 PM 3 comments: