Today I heard part of an interview with the EPA administrator, Lisa Jackson, which made my blood boil. During the interview, she threw out the tired lie that American automakers are building too many "large vehicles which the American public do not want to buy" (approximate quote).
If the American people don't want to buy large vehicles, then why is it that the top selling vehicles in the U.S. are as follows?
Top 20 vehicles, Feb 2011

Notice the * rows, which are large pickups. And notice the ^ rows, which are midsize or full size cars. 11 of the top 20 vehicles are midsized or large, and 8 of the top 10 are midsized or large.
Now explain this to me, if Americans don't really want to buy large cars, why aren't the top selling vehicles all small cars like the VW Jetta? Is someone twisting their arms into buying the F150's and the Impalas?
Obama and the EPA administrator need to drop the talking points. American's don't want tiny cars.
Posted by Unknown at 8:49 PM 1 comment:

To my surprise, today I received a UPS letter envelope containing a check for $2,450. From the ATP Oil & Gas Co. in Texas. Which I have never done business with. The return address on the UPS envelope was from a different location, in Minnesota, also a place I had never done business with.
Then I remembered--some guy had emailed me about a camera lens I was trying to sell on eBay, and offered to send me a check for it if I would ship it to him. I said "ok" in case he was legit, but I suspected he wasn't.

So here it is, my trophy. A ridiculously bad fake check. Note the strange mix of fongs -- Arial, Times, and Comic Sans. The smudge from my wetted finger. 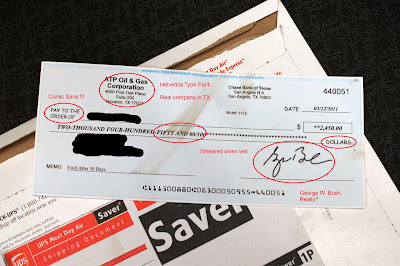 Bottom line, don't ever accept overpayment for a Craiglist item from a stranger, who wants you to return the overpayment via Western Union. It is 100% scam.

The UAW's president, aptly named Bob King, is out in the press landing punches before the first bell.

"I like Alan Mulally. But I just think it's morally wrong," said King, who assumed the leadership of the union last year. "It creates problems for Ford in both the salaried work force and the hourly work force. It seems like one individual is getting all of the gain."

This is typical left wing progressive posturing, setting up class envy as a wedge between the UAW's hourly workers and the managers of the auto companies.

"It seems like one individual is getting all of the gain".  What?!?  What about the shareholders?  From a low of around $1.60, Ford's stock price has recovered to near $15.  That is billions of dollars of value returned to stockholders, many of whom happen to be in the UAW.  Not to mention jobs saved, direct and indirect.  Ford dealer's didn't get crushed the way GM and Chrysler dealers did.

Alan Mullaly, though not single handedly, was a key player in keeping Ford from going bankrupt along with GM and Chrysler.  As such, he is very valuable--CEOs who can save companies and preserve billions of dollars of shareholder value are not exactly hiding under every rock.  Successful CEOs, like sports stars, have a market value.  If Ford didn't offer Mullaly a generous performance based pay package, maybe he wouldn't have come from Boeing to save Ford.  Maybe he would have been snapped up by some other company in need of a turn-around.
Maybe Ford would have gone under.
By the way, when was the last time you heard Bob King railing against the excessive pay of his unionized brethren, the professional football players of the NFL?
Posted by Unknown at 8:40 AM 1 comment:

I got my oil changed the other day.  I do it at my dealership because they give me points I can use to get free service, so it works out to be a reasonable deal.  This time, they did the "we recommend you flush your power steering fluid' pitch on me, going so far as offering to show me that it was "dirty".   Upon inspection my fluid (which is about 50,000mi old) was a medium cherry color, like cherry coke.  Not very dirty.

Here's the truth.  Power steering fluid is good for well over 100,000 miles in normal usage.  It changes color because it leaches carbon black and other chemicals from the rubber power steering hoses and fittings.  Just because it is dark does not mean it is damaged.
When should you flush your power steering fluid?  If it gets overheated (not sure how, perhaps failing pump?), or contaminated.  And you don't need to power flush it, you can simply suck it out with a turkey baster and refill the reservoir.  According to an expert on this subject, who I happen to know, there has been no proven benefit from power steering pressure flushing.
When the dealer pushes you to change your power steering fluid, he is really just trying to improve his profit margin on your sale.
Posted by Unknown at 12:43 PM 2 comments:

This morning, I was driving in to work and noticed the local "Irish" bar had people huddled in the doorway, waiting for the place to open for service.
It was 8:30 am.
If I was Irish I think I would be annoyed that my cultural heritage was being used an excuse to drink all day.
Posted by Unknown at 10:19 AM No comments:

Neat video here.
Posted by Unknown at 2:08 PM No comments:

PETA: Save Spiders... Donate Your Mazda?

I am not sure if this is serious.  If anyone other than PETA had mailed it out, I would think it was a joke, but PETA is not known for a sense of humor.  On PETA's blog, they are suggesting that people donate their Mazda6's to PETA rather than hurt spiders that might be hiding in the vapor emissions system.  Riiiight.

Here's an idea, PETA.   How about you donate some mechanics to de-spider people's cars for free, if you are so concerned about spider lives?
As if the typical Mazda buyer, a middle income person, can afford to donate a relatively new car to PETA to avoid hurting spiders.
Posted by Unknown at 3:59 PM 1 comment:

I have been wanting to try roasting my own coffee 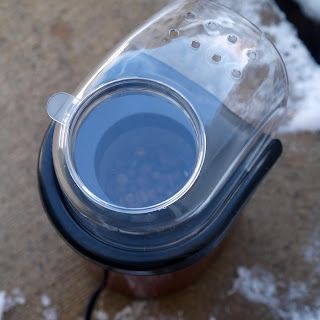 beans, for the experience, and to see if I could notice much of a difference between fresh roasted beans and store bought beans.
Equipment:
1 $10 popcorn air popper, purchased from CVS on clearance.
1 extension cord, to allow outdoor roasting
1/2 lb green Sumatra coffe beans, from local coffee store.~$5.00
Procedure:
I poured about 5 tbsp of green coffee beans into the popper and ran it while watching the color and listenign for the "crack". The beans started cracking about 4 minutes into the cycle, and had turned a nice medium brown color by about 4 minutes. I dumped them out on a sheet to cool.As the beans roasted, chaff (the skin of the coffee 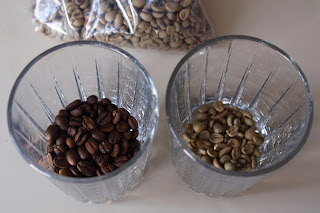 beans) popped
up out of popcorn machine and floated away.
Results:
The beans are not as uniform as I would like, perhaps because I put a little too many in the popper. As a result, some of them got more cooked, as they rotated in the middle bottom of the pot, while the ones in the top middle of the pot probably cooked less.
After I ground the beans, I got an excellent fresh coffee aroma.
I brewed using my Bodum French press. The 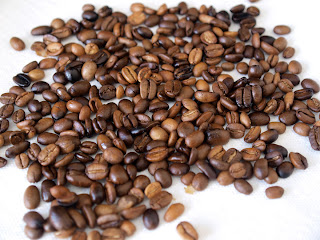 result has a very robust, earth
y flavor. There is a slight "soapy" flavor, which I think may come from some of the under-roasted beans.
Posted by Unknown at 12:21 PM 2 comments:

The Politics of Gas Prices

Gas (and food) prices are going to be Obama's "Waterloo" in 2012. And Obama won't be playing the part of Duke Wellington.
You can't have high unemployment, high energy prices, and high food prices and expect the party controlling the White House to poll well.
Obama and the Democrats' problem is that they have not had a popular approach to these issues. For example, pursuing ethanol mandates is counterproductive for both gas prices and food prices. Moratoriums on oil drilling restrict supply, while clean energy mandates and permitting slowdowns squeeze utility prices. Each issue is run by a different White House czar, but the sum effect is to push an expensive green agenda.
Perversely, restricting drilling also hurts the federal budget, because oil unpumped is oil untaxed.
Meanwhile, I think the average American voter, unless he is a member of a major labor union, is saying "hold on, let's fix the economy and the budget, and then worry about environmental progress!"
The average American driver also doesn't want to be pushed into a Honda Fit or Ford Fiesta sized car, or to have to pay a $5,000 premium for a hybrid, which is what the aggresive expansion of CAFE standards leads to. The average American wants a comfortable car and cheap gas, and an affordable price for both.
Posted by Unknown at 2:20 PM 1 comment:

I'd hate to be jet-engine powering up a mountain and hit a tree... you'd need a fire extinguisher and then a stretcher. This is not a toy for the timid!

Mitsubishi: Dead In The U.S.?

Mitsubishi, which is barely hanging on in the U.S. (When was the last time you saw a Galant?), is rumored to be killing off its Evo line, to focus its efforts on EVs and hybrids.

This is nothing less than market suicide, in the U.S. market, because U.S. consumers have note yet embraced electric motoring.  Anecdotally, the only Mitsubishi owners I knew personally were Evo drivers.
Mitsubishi, already in big trouble, will probably become a niche player, sold as a boutique brand by multi-brand dealerships.  How can they maintain a dealer network on EVs and hybrids alone?
Posted by Unknown at 12:19 PM No comments:

IIHS has released a report on the poor state of under-ride protection on American large truck trailers.  If you watch this video, I promise you you will feel queasy.  In it, a 2010 Malibu is crashed into the rear of a U.S. spec trailer at 35mph.   All of the Malibu's excellent front crash structures slide under the rear of the trailer, as the guard buckles and folds under, and the rear of the trailer hits the dummies in the head.

Adding beefier rear guards to trailers will cost a little cost, and a little weight, to each trailer.  But seeing as there are hundreds of car-trailer accidents each year, I think it is probably worth it.
Another issue, which IIHS doesn't discuss, is side protection for trailers.  European trailers have side under-ride guards as well as rear.
Posted by Unknown at 10:56 AM 1 comment: