Ford had some cojones. Not content to just show off the outrageously powerful 650HP GT500, they actually set up a dyno, strapped one down, and did 140mph pulls ever hour. It was LOUD. I am amazed the fire marshal allowed it.

Continuing with its previous nonsensical policy, California's ARB (Air Resource Board) has published new regulations which require automakers to sell a certain percentage of vehicles which are BEV, PHEV, hydrogen, or otherwise not just gasoline powered.

This is bad pollicy because the mandate tells the producers what they must sell, without forcing anyone to actually buy the cars.
This puts automakers in a difficult spot.  If they can't make the vehicles attractive enough for consumers to buy, they have to dump them into the marketplace somehow.  They would have to sell these ZEVs at a substantial loss, and make up for the financial damage by raising prices on traditional vehicles.  The result is the same as a tax on gasoline vehicles, but done through a back-door which causes consumers to be angry with the automakers and not the regulators.
A better policy for California would be to encourage consumers to buy ZEVs, through more direct measures.   For example, fuel taxes could be used to large fund tax rebates, so that gasoline consumers would subsidize ZEV purchases.  Currently, CA offers a $2,500 rebate for a BEV vehicle, but this does not come close to offsetting the cost.
The previous ZEV mandate was watered down significantly because it wasn't a feasible goal.  I don't expect this one to be feasible either, based on people's sensitivity to higher up front purchase costs.
Posted by Unknown at 11:34 AM 2 comments:

In today's Detroit News is a well written piece about the struggles of hybrids in the marketplace.  Bottom line: most people would rather pay a lot less money for somewhat less efficiency.

Mike Jackson, chief executive of the retail chain AutoNation Inc., said that 75 percent of customers come into his showrooms and want to talk about hybrids. Only about 2.5 percent of AutoNation sales are hybrids.
"What happens from the 75 percent consideration to the 2.5 percent commitment?" Jackson said.
"They look at the price premium for the technology, which is already subsidized and discounted, and say, 'The payback period is too long; not for me.'"

At the point of purchase decision, people notice that the payback time for the hybrid-electric powertrain is on the order of 5 or more years, and the practicality of the vehicle is reduced because of the packaging of the batteries.  They also notice that one of the more efficient non-hybrid vehicles, while not as efficient as a hybrid, is pushing 40mpg on the highway.
As a result, hybrid sales are not growing very quickly, even though gasoline prices in the U.S. remain stubbornly near $3.50/gal.

Hybrid sales slowed last year to 2.2 percent of U.S. sales, from 2.4 percent in 2010, according to researcher LMC Automotive.

Without widespread adoption, there is less hope for economies of scale in battery production.
For hybrids to really compete, the cost of batteries, and their energy density, must improve dramatically, or the price of fuel must go so high that the payback time will approach a few years--like $5/gal.

Safety Research Strategies (Sean Kane's outfit), the one that has been pushing the claim that unintended acceleration on the part of Toyota was not caused by pedal misapplication, but rather by un-identified electronic gremlins, now brings us this sage advice: if you are in a tornado prone area, you should keep some helmets around to avoid head injuries should the tornado actually hit your house.

I'm not kidding.  They are serious.
Really!  A whistling monster of a twister is bearing down on your house, and you are expected to remember to don your headgear?
I think a much more sensible (though expensive) approach would be to keep a safe room in the house, a hardened room in the interior of the house which is by design isolated from the rest of the house structurally.  FEMA has a page on tornado safe rooms.
Posted by Unknown at 1:36 PM 4 comments:

Mercedes uses a huge photo of Che Guevara and a joke about revolution during a presentation in Las Vegas at CES.
Silly Mercedes.  Perhaps you should use revolutionaries from your own cultural background, you know, like this guy.

In seriousness, Che Guevara was a murderer, and should not be glorified.
Posted by Unknown at 1:21 PM 1 comment:

President Barack Obama held up Ford Motor Co. as an example of companies that are contributing to the economy by bringing jobs back into the U.S. — and that should be rewarded for their efforts.

"You've heard of outsourcing. Well, these companies are insourcing," Obama said Wednesday in a speech, surrounded by business executives, state and local officials and union leaders.

See, the reason that there is an inflow of jobs into the U.S., and particularly Michigan, is that we are now a low-cost producer.  Partly by devaluing the dollar, and partly by forcing unions to take big concessions, it is now more affordable to do business here.
The union leadership is going to pound Romney on his Bain capital experience, but they are going to give Obama a pass, even though his Car Czar rammed a no-strike clause down the UAW's throat.
Posted by Unknown at 9:45 AM 12 comments:

The demise of the old-school body-on-frame SUV continues.  One of the older models on the market, the Nissan Pathfinder, is following in the footsteps of Chrysler, Ford, and GM and going to the lighter, safer (to cars), and better handling unibody architecture.

Will it handle the Rubicon trail?  No, but most people won't ever need to do anything nearly so demanding.
More here.
Posted by Unknown at 10:45 AM 6 comments:

The other day I saw glass bottles of Coke for sale at the local upscale supermarket, for the princely sum or $1/each.  I had heard that some Coke lovers swear that Mexican Coke is better than American Coke because it is made with real sugar, not corn syrup.  I have also heard this claim regarding Passover Coke.

So I bought a couple of bottles to try.

I'm not a trained taster, and I didn't do a scientific grade double blind study.  But to my taste, the Mexican coke tasted sweeter, and felt stickier, than what I was used to.  I wouldn't pay extra for it.

However, the glass bottles were a revelation.  They feel wonderful in the hand, hefty and cold and perfectly curved and balanced.   I wouldn't pay more for Mexican Coke, but I would pay more for American Coke in these retro glass bottles! 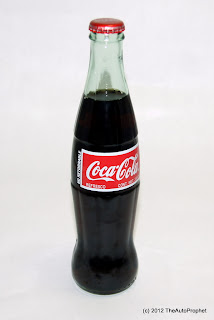