I have been using Carbonite as my backup service for 2 years now, but I will not be renewing.
Carbonite has an infuriating feature.  To save storage space on their end, they automatically de-select video files from your backup sets.  Which means that to backup family videos, you have to manually go and select video files every so often.
I have had enough of this.
My subscription will run out soon, and I will switch to a different service.  So far, Mozy and Backblaze look the most promising.  Both are unlimited, cheap, and seem to get good reviews.
Posted by Unknown at 11:22 AM 3 comments:

I don't really get a vote on the 2010 North American Car Of The Year, but if I did, here is how I would vote.

Car Vote: 2010 Ford Fusion Hybrd
The Fusion Hybrid is, according to numerous sources, the best hybrid sedan on the market.  From car magazines to Consumer Reports, the hybrid Fusion is very highly rated for its ride and handling, refinement, and neat instrument cluster.  The styling update is handsome, making the car look faster and more masculine than the first generation Fusion.  The Fusion is also known for high reliability.  A significant downside to this car is that the packaging of the battery pack, behind the rear seat back, precludes a fold-down rear seat feature.  Home Depot and Ikea runs will have to be done with something else.

The Buick Lacrosse is a major product for GM, and shows the future direction of Buick.  It is a handsome new package (though a bit over-styled) with an interesting direct injection I4 motor which makes good power and fuel economy.

The VW Golf gets good reviews for ride and handling, power, and interior design.  It is one of the few passenger cars that can be had with a clean diesel engine, becaus VW has been committed to selling diesels in the U.S.  But its exterior design, to me, is bland.  And VW has not been known for stellar reliability

Truck Vote: 2010 Chevrolet Equinox
The Equinox is a major new product for GM, updating their badly uncompetitive previous compact SUV offerings which included the previous Equinox, as well as the recently departed Pontiac Torrent and Saturn Vue.  It has an attractive design, with sharp styling and good proportions.  The interior is much better than previous Chevrolet products, and stands with the best in its class.  Fuel economy is excellent with the 2.4L Ecotech with direct injection.  The major issue with this vehicle is probably GM's inconsistent quality.  Hopefully for GM, the Equinox is one of their high quality products.

The Ford Transit Connect is a neat little delivery van, but I am not sure it is TOTY material.  It isn't really a consumer product, but a fleet vehicle.  It has a spartan interior, and being based on the current Focus platform, its engine and transmission are getting old.  Fuel economy is very good for its payload, and reviews praise the handling.

The Subaru Outback is a good solid Subaru product.  The new model is larger than the previous generation, but doesn't come with any more power.  It combines high reliability and safety with bland styling and boxer engines.  It is quiet and comfortable, but to me, boring.

Posted by Unknown at 2:06 PM No comments:

This so bad, it is classic. I hope, for GM's sake, they bury this song and dance quick.

This article from New Scientist reports that NASA needs about $3 Billion more dollars in their budget to support "meaningful" human space exploration, and that the Obama administration is likely to give them part of their request.

In October, a report by a White House panel headed by former Lockheed Martin CEO Norman Augustine said NASA would be unable to support meaningful human space exploration without at least $3 billion more per year.

In my opinon, we have much higher priorities for our science and research funding than manned space exploration, which is dangerous and expensive.  Things like high-efficiency cars, future fuel sources, smart power distribution, smart traffic control, robotic warfare.  We need ways to find WMD's, and ways to zap terrorists from thousands of miles away.

NASA should focus on cheaper (relatively) un-manned exploration.  We should be sending more robot probes and space telescopes, not people.  Star Trek will remain a fantasy for now, and that is OK.
Posted by Unknown at 11:24 AM No comments:

Ladies and gentlemen, I present to you, the Smart Woody.

Do people want small cars?  The market research so far says "not really".  Paul Eisenstein has a good compact writeup of the issue here.

Will people buy small cars? Yes, they will, and as time goes on, they will have no choice.

I expect the mechanism for this to be pricing.  Automakers will have no choice but raise prices on large and thirsty vehicles, and limit production volumes, to encourage people to buy the smaller cars.

Large, high performance vehicles will continue to be sold, but at a significant price premium.

I want someone to make a little computer which has the following specifications.  Dell, are you listening?


Something like the Dell 11z or Acer 1410 but in a tablet form instead of notebook form.  The Archos 9 is close, but it appears to be under-powered for the task, and early reports are that it struggles with some video files.

Oh, and please get it to market before Apple shows up and ruins the show with their hype.

The Return of 55mph? Probably Not Yet.

Over at the Examiner, Mark Tapscot is warning that the EPA is going to inevitably mandate a national speed limit, as a result of its CO2 endangerment finding.

I don't think the EPA will do it, in part because I am not sure they can. The EPA has a mandate to regulate major emitters of pollution, and in general works on the large scale industrial policy level. The EPA makes rules on smog forming automobile emissions, also known as Tier II, for example.

Speed limits are locally regulated, on a state-by-state basis. The old 55mph national speed limit was enacted by Congress, and was enforced on the states with the threat of withholding road funding. The EPA doesn't have this budgetary power, and I am not sure if it has the legal authority to impose a national speed limit.

The EPA could, however, publish a rule that requires automakers to add speed related equipment to their vehicles. For example, a GPS system with a database of local speed limits could babysit the driver and make it unpleasant or impossible to speed. At the most extreme, the EPA could mandate a speed control system which simply limits the top speed of a vehicle.

I think it would be an excellent national debate if they tried for it. Let's get it out in the open. Do we believe in man-made global warming, as a nation, or do we not? Do we buy the EPA's ruling that CO2 is a poison, not just a plant food?

At Costco the other day, I saw that they were selling Kirkland branded beer. Kirkland is Costco's store brand. It was reasonably priced for "real beer", about $18 for a case of 24. 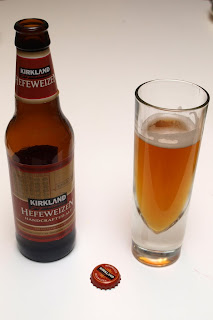 Four flavors are included, one sixpack each: Hefeweizen, Pale Ale, German Lager, and Amber Ale.
I have tasted each flavor, and they all have similar characteristics. They have a solid hoppy taste, with nice color and a light to medium body. This is relatively light beer, not barley stew, but with a good hop hit.

The Hegeweizen was actually cloudy (see photo), which is sort of neat. 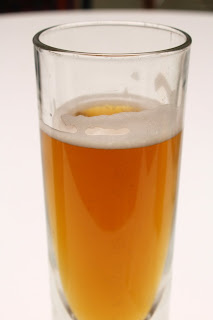 Overall, I would say this is a pretty good value for decent beer. I'm not sure it is as good as, say, Bell's, but I am not regretting the purchase.

If you get any auto magazines, such as C&D or AW or MT, you have probably seen the multipage ads for WeatherTech floor mats, the ones that show the ankles and tow cleavage.  I decided to order a set of front "semi custom" mats for my car.

While they are expensive, at about $60/pair delivered, they do fit quite well.  They have a built in hole to mount on the mat retainer hook.  They are made of a nice, heavy rubber with deep grooves and good grip.  They fit very well.  Overall, I would say they are worth the price.  And they are made in the U.S.A., a rare breed nowadays.

*This review was not requested by WeatherTech, and no compensation was given for it.

I heard on the radio this morning that a parked unmarked police cruiser, a Dodge Charger, was stolen from Detroit, ironically, from a policeman who was with the auto theft unit.  Later, a woman who's car had stalled out on I-94 was raped by two men who drove up in a vehicle that matched the description.  The wire story is here.

If you are ever followed by a vehicle that looks like a police car, but is not marked, you are NOT obligated to pull over.  If they flash lights at you, and you aren't sure if they are  legit or not, do not pull over unless you are in a well lit public area.  You can also call 911 and explain what is going on, and they will try figure out what is going on.