Some time ago I got one of those awesome little IR controlled helicopters, a Syma S107. 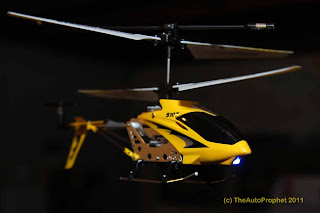 Then, I saw a guy on eBay selling keychain video recorders, similar to this one. Of course, I thought I maybe could mount the guts of the micro video camera under the helicopter, and record my flights.
First, I dis-assembled the video camera. It isn't hard, there are 4 screws, 2 on the outside and 2 on the inside. Then the board pops out of the shell. 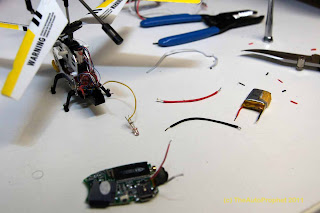 I also partly disassembled the helicopter, to get to the power wires. 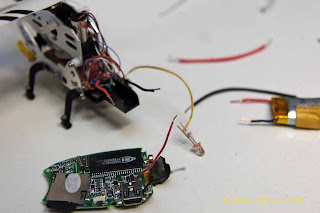 Next, I cut the original battery leads on the video camera. Both batteries are 3.7V, so the helicopter battery will run the camera.
I soldered the power wires together, red to red and black to black, to form a parallel circuit. I wrapped the joints with a little electrical tape, to make sure there wouldn't be any short circuits.
Then, I put the helicopter back together. I slung the camera pod under the body, slightly forward of center, and used a rubber band to hold it. 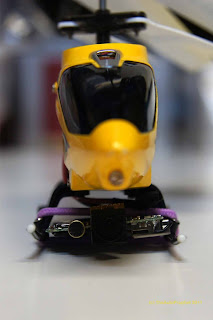 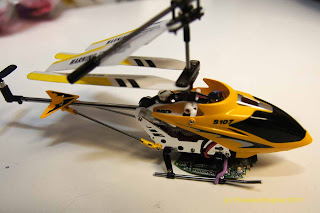 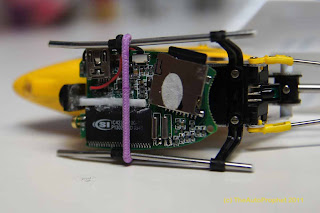 One problem I found was that the camera vibrated wildly on its ribbon, and needed support. I glued a short bit of coated wire to the board, bent the end, and glued that to the back of the camera. 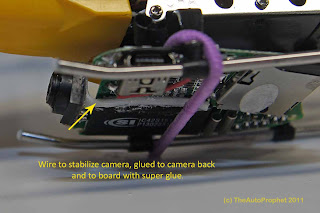 Here's a short sample movie, of me flying it around my small laundry room. The camera gives reasonably good video (cell phone quality) in bright light. The sound is interesting, you can gear the whir of the helicopter gears and the wind noise from the rotor wash.
The toy still flies reasonably well, though the added weight does make the helicopter noticeably slower to react. The weight bias is slightly too far forward, the way I have it, so copter tends to drift forward, and I need to add some weight to the rear to balance it better. You can't mount the camera pod too far to the rear, because if it blocks the view of the IR sensor (which is located between the rear tail struts) your helicopter will lose touch with your controller frequently.
The effect on runtime is significant... my stock helicopter would fly for around 5 minutes or so (I never really timed it carefully). The modded helicopter will fly for around 3:00 or so. I blame two factors: the weight of the camera causes you to use more throttle (and more main rotor), and the drain from the camera recording.
My next step is to locate a small, easy to detach power connector, and install it, so I can easily remove the camera pod if I don't want to record.
Posted by Unknown at 12:34 AM No comments:

I was offered a chance to give away a free mail-in rebate good for a 5 qt. jug of G-Oil motor oil, so here it is.
Link.
G-Oil is an interesting new product from Green Earth Technologies. It is billed as a superior motor oil, as good as any synthetic or crude based product, however G-Oil is made from cattle. It comes in 5w-30 weight or racing formula.
Yes, beef.
G-Oil "recycles" beef tallow into motor oil, which is also bio-degradable. It is made in the USA.
Posted by Unknown at 10:24 PM No comments:

A bit if gas-pump pinup activism, a blogger is advocating pasting up these fliers at gas pumps, to blame Obama for rising gas prices.
http://disruptthenarrative.wordpress.com/2011/04/24/gas-pump-activism/
To be fair, Obama was talking about his hypothetical (and never enacted) cap and trade plan, and I think he was talking about electricity, not oil.  See http://www.realclearpolitics.com/video/2009/06/27/flashback_obama_says_cap_and_trade_makes_electricity_rates_skyrocket.html
The current run-up in oil prices has a combination of causes, which include war in the middle east, speculation, cheap dollars, and reduced exploration due to Obama environmental policy.
Posted by Unknown at 11:48 AM No comments:

Consumer Reports bought a Leaf.
Thinking that a range estimate of 30 miles meant close to 30 miles, Jon Linkov left home with a kid to drop off at daycare and a commute to the office.
17 miles later, he was in turtle mode.


About 17 miles from startup, the potential range indicator had become three blinking dashes. I realized I was not going to make it to work, and decided to get off the highway. As I exited the Leaf entered "Turtle" mode, complete with a small, green turtle indicator light. I proceeded to limp the next 1.3 miles into town. The final humiliation came when a highway department mower passed me.

I can hear the true believers yelling at me already, since I didn't charge the car overnight. The thing is, we're charging all the plug-in cars at our facility, on 220-volt chargers that can log exactly how much just our cars are using. Planning a 46-mile round trip when the car suggested I had 60 miles available didn't seem too much to ask.

Range anxiety isn't a bugbear invented by the oil lobby.  It's real.  And Nissan really needs to refine their range estimation algorithm, because this is the sort of thing that fuels consumer backlash.
Posted by Unknown at 8:49 AM 4 comments:

Over at Forbes, there is a post listing the ten fastest vehicles under $30,000.  The results are interesting, but they are sorted by 0-60 times. 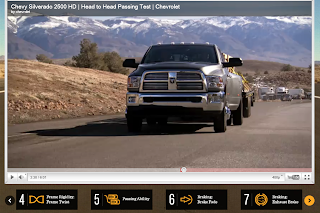 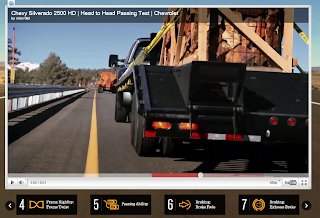 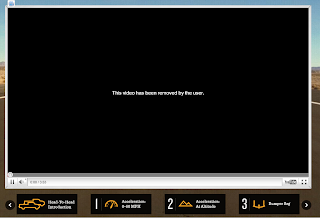 A guy at work pointed this out to me.  If you watch closely, in video #5 of Chevrolet's HD truck HD2HD video series, the Ram truck changes from a single mirror model to a dual mirror model.  Which means that Chevrolet isn't showing just vidoe of the official test, but is also showing video of another vehicle.

The single mirror shot can be seen at around 3:30, the dual mirror can be seen in a few shots, this one is at 3:52
In general, I think the whole "passing the truck before hitting the slowpoke" thing was pretty lame, as in contrived.
Also, for some reason, videos #1, and #2 are now missing from YouTube.
Posted by Unknown at 11:44 AM 1 comment:

Interesting nugget in the just released sales numbers... Saab sold 830 cars in March, compared to Porsche's 771. However, Saab is having trouble paying suppliers, and needs to come up with a new infusion of cash soon, or sell itself off again.
Posted by Unknown at 8:38 PM 1 comment:

Breaking news! Exclusive to Autopophet:
Bally's, the U.S. Department of Energy, and GM are announcing today that they are forming a collaborative joint venture called "Sweat-n-Volt(tm)".
Sweat-n-Volt will be installed in several Bally's Fitness locations to show the feasibility of recovering exercise energy as usable transportation fuel. Treadmills, stair-steppers, and stationary bicycles will be modified to generate 12v DC current using left over alternators donated by GM. The 12v feeds will be joined at a 12 to 240v transformer, which will then feed a free plug-in hybrid charging station in the parking lot.
"We're very excited to harness the exercise energy of Americans to provide transportation fuel", said Joe White, the D.O.E. project manager. "We expect California to be especially productive. The mid-west not as much, although we anticipate more miles generated after the 1st of the year."
GM's spokesman, Bob Lawrence, "This is a historic opportunity to combine America's health kick with American's transportation needs. We're also looking at the feasibility of marketing a portable version, so people can pedal their way to a fully charged Volt, and a thinner waistline, in the comfort of their own home"
Bally's Tammy Silverstein said "We were already looking at doing this to help lower our electricity bill. Now, we can help our patrons get home from the gym, too."
(April Fools!)
Posted by Unknown at 2:26 PM No comments:

I have written it before, and more confirmation today, the V6 is dying out as America's engine of choice.  According to Ward's, GM will be installing only I4 engines it the new 2013 Malibu.  The current Malibu is one of the top selling mid-size sedans in the U.S. market.

By offering direct injection and possibly turbocharging, the Malibu I4 will no doubt make V6 like power numbers while getting better fuel economy.  This is they way of the future, and is a necessity because of the relentless ramp-up in CAFE standards.
Malibu follows Hyundai Sonata, another top selling sedan which dropped a V6 option.  I expect that as the other mid-sized cars get refreshed, they also will drop the V6 option, or perhaps reserve it for the most expensive (and lower volume) performance version only.
Posted by Unknown at 9:03 AM No comments: